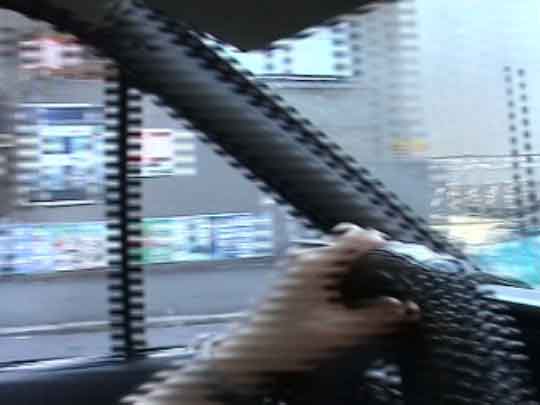 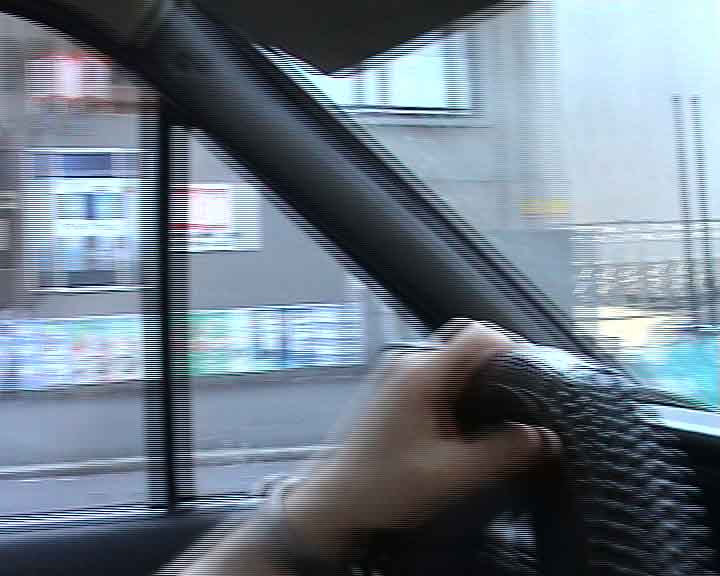 Not resized and not deinterlaced

Do you think you record 25 frames per second when you make a movie with your digital camcorder?

Your digital camcorder does the following:
Records 50 pictures per second, intermixing every 2 consecutive pictures (with half the height) into 1 frame.

In fact, you don't call them pictures, but fields. So 2 fields are mixed into 1 frame. This mixing is called interlacing.

Here is an example of what your digital camcorder does:

Capture field1 (captures at half the height, or full height and then resizes down):

They pretty much look the same. But wait, they ARE different. You can see by comparing the position of the thumb and the keyboard keys.

What you see above is an exact frame as on tape of your camcorder.

Here is a zoomed view of the above Frame 1:

As you can clearly see above, Frame1 consists of Field1 and Field2.

In other words: A single frame consist of 2 captures of 2 different moments in time. Field1=Time1, Field2=Time2. See this frame below. This is a capture directly from MTV's Digital Video Broadcasting:

The above scene consists of 2 totally different scenes because this is the frame where there's a change from scene1 to scene2.

Because of this time intermix (1 frame=time1+time2) it is impossible to:

Impossible. You will have to alter at least one of those points. Except, when there was no motion.

On a computer screen interlaced recordings are annoying to watch because the lines are really disturbing. Especially in scenes where there's movement from left to right (right to left) you see the interlacing, like in this example:

The text at the bottom scrolls from right to left and thus leaves you with mice teeth because this frame consists of 2 snapshots of time, as described above.

Mice teeth because of an up-down movement. 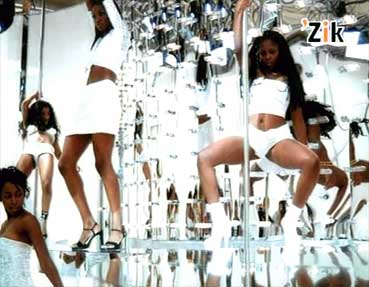 This is a scene from the music clip "Anywhere" from the performer 112. There aren't any motion interlace lines there, but this is a frame where there was a short flash, thus there's a difference from one field to the other.

To make things even more complicated, some digital camcorders have something you could call "color interlacing". While this term maybe somewhat inaccurate to describe the source of the artefacts, it is quite descriptive for the end result.

Interlaced Frame=Field1+Field2 as you can see clearly.

But even after deinterlacing some red and some green pixels stay where the last field was.

Here is another example (after deinterlacing):

There is even something you could call brightness interlacing.

This is an capture from the music clip "Sexy" performed by "French Affair" from the TV channel Tango TV (from Luxembourg). This music clip was aired progressively. There aren't any mice teeth anywhere in this clip.

However you see "brightness interlacing lines". Maybe this clip was recorded interlaced and was then transformed to be progressive and these are the left deinterlacing artefacts.

Because even with the methods described on this site it's hard to get perfect results.

No, it's not Kylie Minogue and her gay dentist. It's pretty Kylie and pretty Jason Donovan performing "Especially for you" in 1988 in "Top of the Pops" 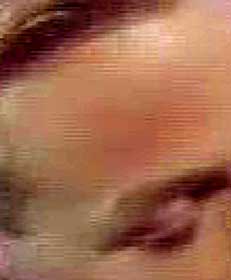 As you see there are some deinterlacing artefacts. However, you'll hardly notice them during play.

Is interlacing a bug?

Unfortunately this is the way digital camcorders and digital VCRs record and digital broadcasting is done. One second of a movie consists of 25 frames = 50 interlaced images.

That means that when you deinterlace a movie for your computer or your projector or your TFT monitor, and you want to play it on a standard TV set, your software (or your hardware) have to interlace it again.

Example: There are 2 kinds of DVDs: Some have an interlaced format (like the examples above) and some are transferred from film to DVD directly, thus have 25 progressive frames encoded. This is purely a decision of the DVD company. Since TV sets expect you to feed them with 50 images per seconds (whether it's from your old analog VHS recorder or from your antenna or from your DVD player) the DVD player needs to convert those 25 progressive frames to 50 images and send them to the TV set. That means they have to get interlaced them (well, it's not interlacing in its original sense, but you are making 50 images out of 25 images) instead of letting the TV simply display those original 25 fps.

Just recently Panasonic introduced one of the first TV sets to be able to receive progressive frames from the DVD player.  So you need 2 things: A special DVD player, that suppresses the 25p->50p conversion and this special TV set.

There are several methods of de-interlacing.

NEVER BE FOOLED: If you see just one single frame instead of the whole movie to show you the quality of any deinterlacing method, be aware. You won't know how good or bad it really is.

Because you don't know how fluid the movie plays and how many fine structures are lost and whether the deinterlacing method still fails sometimes or leaves interlaced lines.

Instead, compare the deinterlacing methods by watching one minute or so of both movies with still and fast moving scenes. How fluid is it? How blurred is it? How many interlacing artifacts are left?

How to compare picture quality the right way

Here is another example. This time to show you, how fluid a slow motion can be generated out of a 50fps movie: